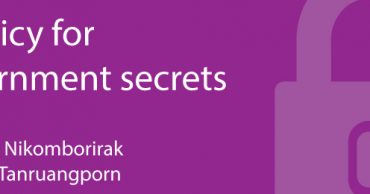 Deunden Nikomborirak, Peeradej Tanruangporn One core aspect of the Thai state that annoys people of all political stripes is its secrecy. Despite the promulgation of the Official Information Act in 1997 aimed at promoting the “right to know”, state organisations in Thailand remain riddled with secrecy. A prime example is the rice-pledging scheme. Most developed countries […]