Like it or not, Thailand has to face up to the challenges of disruptive technologies, which have already radically affected many sectors of its economy, from agriculture and industry, to professionals and other services. Unfortunately, the country has yet to formulate a clear strategy about how to confront this challenge. The Thailand Development Research Institute (TDRI), at its annual conference on “Reorienting the Thai Economy to Prepare for the Age of Technological Disruptions”, presented a set of studies that offered some guidance about how businesses, the general public and the government should prepare for the changes.

Many countries, especially, East Asian ones aspire to become AI superpowers, said Somkiat. China announced an industrial policy called “Made in China 2025”, which basically is its version of the Fourth Industrial Revolution policy. The Chinese government has poured massive investment to become an AI major player. Likewise many other countries in East Asia, including Japan, South Korea, Taiwan and Singapore, also allocated a sizable budget to develop technologies related to AI. However, Thailand has yet to formulate its strategy and allocate significant budget for AI development, said Somkiat.

Disruptive technologies affect different economic sectors at different levels of intensity. They have massively shaken up media and entertainment, transportation, energy and telecommunications. Others, such as tourism, healthcare, manufacturing, finance and retail, have also been jolted hard. Sadly, public services and education have been relatively insulated from the disruption even though their changes are required for the adjustment of the aforementioned sectors.  As a result, the public sector and the education system are increasingly out of synch with the rest of the economy. 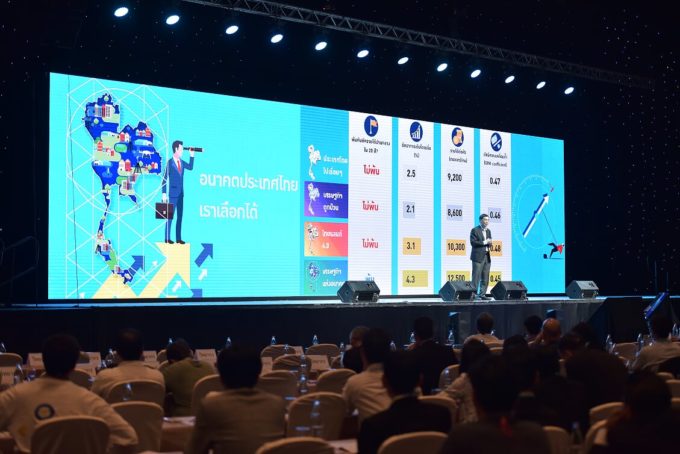 The TDRI outlined different scenarios for what could happen to Thailand under the impact of disruptive technologies. In the first scenario, Thailand cannot respond adequately to disruptive technology changes. For example, it uses too little robots and automation, making its cost of production more expensive than countries that do. As a result, economic activities would relocate to other countries and domestic value added would shrink. In this scenario, Thailand’s GDP growth would average 2.1% per year over the next 20 years and the per capita income would be around $8,600 in 2036, and around 3 million jobs would be lost.

In the second scenario, the Thai government is aware that the country is facing disruptive technological changes and tries to respond. Specifically, it introduces measures to deal with the disruption by announcing the ‘Thailand 4.0’ policy. This includes developing physical infrastructures and providing investment incentives under the Eastern Economic Corridor (EEC) program to attract foreign investment. It also promotes the use of industrial robots and automation.

Somkiat said that the Thailand 4.0 policy would partly save Thailand from serious damage caused by disruptive technologies. However, there are three weaknesses.  First, one mistake of the past that could be repeated is the government does not put a full effort to develop skilled labor force. As a result, investment in high-value added activities, such as research and development, would not be located in Thailand. Second, the current Thailand 4.0 policy does not include a clear AI strategy. Third, there is also no plan to create new jobs for workers whose existing jobs are destroyed by the use of robots and automation.

According to the TDRI’s estimation, in this scenario, jobs destroyed would be cut to half to around 1.5 million. Thailand’s GDP would grow at an average rate of 3.1% per year and income per capita would reach US$10,300 in 20 years. These are significantly below the government’s target of 5% annual GDP growth and $15,000 per capita income at the end of the 20-year Strategic Plan in 2036. It also means Thailand would not be able to escape the so-called ‘middle income trap’ in the next 20 years.

The TDRI proposes an ‘Economy of Tomorrow’ development model. The model adds a clear-cut AI adoption strategy on top of the Thailand 4.0 policy. It also proposes the creation of new jobs to replace those destroyed by technology by creating the ‘3C Economies’, which are ‘Craft Economy’ (producing high-value added products rather than mass products that can be produced by robots), ‘Creative Economy’ (producing goods and services using creativity) and ‘Care Economy’ (delivering services with ‘human touch’).  In this scenario, the Thai economy would grow 4.3% annually, income per capita would be $12,500 in 20 years, and the country would escape the middle-income trap.

To move toward an ‘Economy of Tomorrow’ model, Thailand would have to make serious changes in many directions. TDRI researchers Supanutt Sasiwuttiwat and Nuthasid Rukkiatwong found that more than a half of workers at high risk of losing their jobs from technological disruption are those with both low education and low income. They include retail salespersons, clerks, drivers, machine operators and manufacturing assembly workers. Some professionals, including lawyers, underwriters and radiologists, are also at risk of losing their jobs from technology disruption.

The researchers agreed that the 3C Economies would be the answer. In addition, the government should play an important role in supporting training and encouraging workers to constantly re-invent themselves. In Singapore, for example, the government provides more than 24,000 skills training courses. It also subsidized training expenses by as much as 50-90% and compensates companies that allow their staffs to attend.

The researchers said that Thailand’s basic education system focuses too much on subject content while education for the 21st century needs to focus on attitudes, skills and knowledge (“ASK”). In addition, to prepare for the world of AI, Internet of Things (IOT) and automation, it is important for Thai students to learn about coding and algorithmic thinking. In this regards, Thailand can learn from Estonia’s coding education experience, which has been a success due to broad cooperation between the government, businesses and not-for-profit organizations.

Social welfare systems related to work also need to be improved in a world disrupted by technology changes. Worawan Chandoeywit, a lecturer at Khon Kaen University, TDRI’s research fellows. Wichsinee Wibulpolprasert and Boonwara Sumano Chenpguengpown, argued that disruptive technologies have affected both formal and informal workers. Some formal workers might be able to shift to informal work as “Gig workers” as digital technologies allow them to work on on-line platforms, for instance. The researchers suggested that the government start collecting data of online platform-based workers to form appropriate policies.

Thailand’s 150-billion-baht Unemployment Insurance Fund is enough to cover compensation at the current rate of unemployment for at least seven years. However, if workers are replaced by technology en masse, the period would be shorter.

Thailand does not have an active labor market policy. Many unemployed people do not look for training to improve themselves while some have turned to freelance work. Worawan recommended that Thailand should utilize the Unemployment Insurance Fund to actively upgrade human capital of Thai workers. Unemployed workers should get a chance to attend training courses to improve their skills and return to the labor market.

They would then be able to contribute to economic development and tax payment again. She proposed the government should also encourage and support employers to employ retrained workers. Also, Thailand could adopt Singapore’s policy on issuing training coupons to citizens. Both measures cost less than compensating unemployed workers.

Moreover, the government should stop compensating workers who resign voluntarily. There are evidences that show that self-employed workers are reluctant to join the Social Security Fund. Young workers do not have a long-term vision while others found that the welfare provided by the government was not attractive enough. In the future, if unemployment rises because of disruptive technologies, then the number of workers contributing to the Social Security Fund will shrink too.

Disruptive technologies such as blockchain, e-money and digital identification could be used to improve the social security system for the underprivileged to reduce leakages and corruption. There were many recent cases of corruption in government’s welfare schemes due to poor distribution system based on paper and cash transfer. Suttipong Kanakakorn, a co-founder of WS3, a blockchain technology company, argued that reducing the use of cash, paper and human intermediaries will reduce corruption. Electronic money can be transferred directly to welfare recipients without passing through intermediaries. Digital IDs could replace physical ID cards, e-money could replace cash, and blockchain could replace paper-based record.

Finally, the state sector’s attitude needs to be adjusted. Government’s policies and regulations should be redesigned accordingly to help the business and other sectors to cope with disruptive technologies, argued Deunden Nikomborirak, TDRI’s Research Director, and Tiensawang Thamwanich, senior researcher. They also argued that attitude of the Thai state toward disruptive technologies is currently unfavorable. Technologies are viewed mainly as risks, rather than opportunities. As a result, backward looking and precautionary regulations have prevented the adoption of new technologies in many areas. While there are many ‘Unicorns’, private start-up companies with valuation more than a billion dollars, in other ASEAN countries, such as Indonesia, Malaysia, Singapore, the Philippines and Vietnam, there are no such companies in Thailand, according to Tiensawang.

Deunden also argued that Thai regulators seem to have negative attitudes toward initial coin offerings (ICOs), a tool for start-ups to raise funds. This reflects in the government’s attempts to collect all kinds of taxes on ICOs such as VAT, income tax and capital gains tax. This would certainly discourage the use of ICOs.

Deunden suggested that the authorities should adopt forward-looking and risk-based regulation. They also need to sufficiently understand new technologies and their impacts. As a result, policy makers and regulators should set up ‘regulatory sandbox’ before imposing rules and regulations.